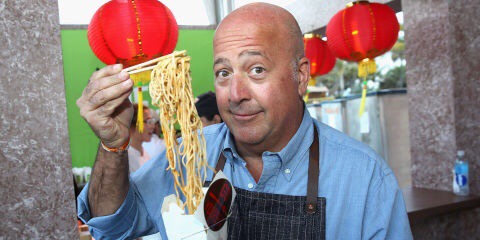 When Bizarre Foods host Andrew Zimmern goes to Rome, he calls up his friend Mario Batali for restaurant recommendations. That’s lucky for him. When he doesn’t have a famous friend’s brain to pick, he goes through a city’s best food writers’ and chefs’ social media accounts to see where they’ve eaten recently, cross-referencing their posts to make an itinerary. And no matter where he’s going, he absolutely does not use Yelp.

“I just…ugh…Yelp drives me crazy,” Zimmern told Business Insider for a video this week. “I think Yelp is neither good nor bad for the food industry. I find it useless.”

It’s useless because it takes the average of thousands of amateur ratings and attempts to rank based on that. People are petty as hell, though. They’ll give a 1-star rating if they had to wait 15 minutes for a table, or a 3-star rating if they’re food was admittedly delicious, but they just don’t really love Cajun cuisine in the first place. They might even throw a joint a 5-star just because they liked its happy hour special.

“If you’re aggregating a lack of expertise, then when I plug in ‘best sushi bar in Los Angeles,’ Yelp doesn’t help me at all,” Zimmern said. “So, if you are a huge food geek like me that really believes in quality—not expensive food, just quality. Above all other things—quality. If you’re into quality, Yelp is not for you.”

Yelp’s user experience also aggravates Zimmern. “Yelp’s not even good for looking up the restaurant’s phone number because you know on the site, they just want you to read their reviews and look at their ads,” he said. “I mean, how fucked up is that?”

Okay, “fucked up” might be a little extreme, but every user who has adventured onto Yelp knows it tends to devolve into a huge time-suck. In the end, chances are you’ll end up at favorite diner down the block, too overwhelmed by options to do more than chew on halfway decent french fries. That, or you call up your good friend Mario Batali.