Sex sells and Hugh Hefner found a way to sell it perhaps better than anybody in the 20th century.

The founder of Playboy and the publishing house built up around the pioneering men’s magazine, which combined sex and intellectual stimulation, has died. He was 91.

“Hugh M. Hefner, the American icon who in 1953 introduced the world to Playboy magazine and built the company into one of the most recognizable American global brands in history, peacefully passed away today from natural causes at his home, The Playboy Mansion, surrounded by loved ones,” Playboy confirmed in a statement to E! News. “He was 91 years old.”

Information regarding memorial services is not available at this time.

Hefner, often referred to by the jauntier moniker “Hef,” passed away at the Playboy Mansion in Los Angeles’ Holmby Hills neighborhood. His longtime home, with its infamous grotto and nearly 22,000 square feet of living space, became one of the most well-known residences in the world, synonymous with “party central” for Hollywood elite and those lucky enough to swing an invitation; it was sold for $100 million in August, but the deal included the stipulation that Hefner could continue to live there for the rest of his life.

The original Playboy Mansion was actually in Chicago, however, where Hefner launched what would become his empire and, ultimately, his legacy.

Hugh Marston Hefner was born on April 9, 1926, to strict Methodist parents. The eldest of two brothers, he served two years in the Army during World War II and then went to work at Esquire as a copywriter. But by 1953, he was ready to strike out on his own in the publishing world.

Having scraped together $8,000, Hefner put together the first issue of Playboy at home and it hit newsstands in December 1953, complete with an old nude photo of screen goddess Marilyn Monroe that Hefner had purchased to add some oomph to the centerfold. The issue sold more than 50,000 copies and a publishing house was born—as was the pop culture relevance of the Playboy centerfold, which became the playground for Hef’s Playmates of the Month.

Ingeniously all the while, the beauties were stripping alongside some of the greatest celebrity interviews and pieces of journalism of all time, including a 1965 sit-down with Martin Luther King Jr., 1974’s “The Great Shark Hunt” by Hunter S. Thompson, the Mark Boal-penned article that became the basis for The Hurt Locker and many more. Short fiction by the likes of Vladimir Nabokov, Saul Bellow and Margaret Atwood has been featured in its pages.

“Reading it for the articles” was a thing.

And while Hefner knew that photos of nude women—which over the years included stars ranging from Madonna, Kate Moss and Sharon Stone to Lindsay Lohan, Pamela Anderson and Naomi Campbell—were what paid the bills, he always had lofty ideals and a firmly progressive philosophy when it came to the tone and sociopolitical purpose of his flagship magazine.

“I think that from the very beginning…what made Playboy so popular was not simply the naked ladies, there were naked ladies in other magazines,” Hefner explained in an interview. “What made the magazine so popular was, even before I started writing the philosophy, there was a point of view in the magazine…Prior to that you couldn’t run nude pictures without some kind of rationale that they were art. I made them into, I put them into a context of a positive, or what I perceived as a positive attitude, on male-female relationships. I suggested that sex was not the enemy, that violence was the enemy, that nice girls like sex.” Joanna Krupa, who posed for Playboy in 2005 and 2009, told Fox News when the latter issue came out, “There are several great reasons why female celebs line up to shoot Playboy: finally a woman gets paid more than a man for comparable work, she gets to set the rules, gets to be in a real team work with other women, as many key positions at Playboy are in fact held by women! She brings in her creative ideas, gets involved in the photo selection and ends up with something she co-created through and through.” 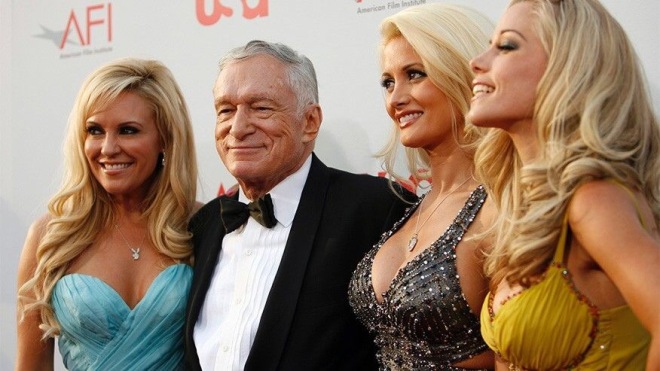 Hefner made good on his image as a ladies’ man who spent the majority of his at-home time in silk pajamas and a smoking jacket. He was married from 1949 until 1959 to Mildred Williams, the mother of his daughter Christie and son David, but remained a bachelor for the next 40 years after they divorced. He of course had numerous girlfriends during that time, including a nine-year relationship with singer and model Barbi Benton, during which she appeared on three Playboy covers.

“I told him I never dated a man over 24,” Benton recalled to People in 1980. “He told me he never dated anyone older than that either.”

Hefner gave an interview from a rotating bed in 1968

Playboy Enterprises expanded to include, off and on over the years, television, film, resorts, nightclubs, products, a philanthropic arm and, ultimately, a number of websites, the brand always recognizable thanks to its signature logo—the silhouette of the head of a dapper, bow-tie-wearing rabbit.

In 1971, Playboy was selling 7 million copies a month, but competition had started to arrive in the form of Penthouse, with its “Penthouse Pets,” and in 1974 Larry Flynt’s Hustler debuted. At first Playboy dabbled in more graphic photos, but eventually returned to its more intellectual, skin-with-a-purpose roots and doubled down on signature features and photo series. 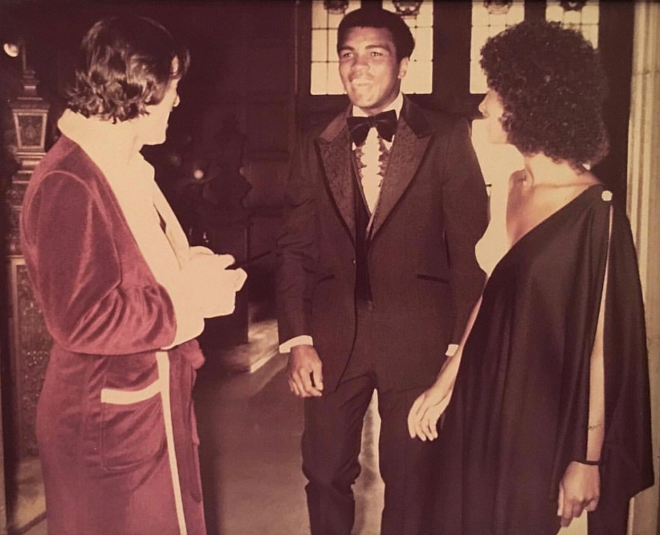 Meanwhile, Hefner moved permanently to his Playboy Mansion in L.A. in 1974 and got involved in local affairs and civic projects, such as the restoration of the Hollywood sign. A minor stroke prompted a reassessment of his lifestyle, to a certain extent. He married longtime girlfriend Kimberley Conrad in 1989 and they had two sons together, Marston and Cooper.

Hef and Kimberley didn’t officially divorce until 2010, but they had an open relationship for years—most publicly when Hefner starred from 2005 to 2010 on E!’s The Girls Next Door with resident girlfriends Kendra Wilkinson, Bridget Marquardt and Holly Madison.

After calling off their engagement at least once prior, Hefner married Crystal Harris on Dec. 31, 2012. Earlier that year he had said that son Cooper would likely carry on as the public face of Playboy in his stead. A private equity firm put Playboy Enterprises on sale this past April $500 million—not an indicator that Hefner’s family would no longer be involved, but rather to shore up the media corporation’s finances.

Asked in 2013 how many women he had been with over the years, Hefner inquired right back to Esquire, “How could I possibly know? Over a thousand, I’m sure. There were chunks of my life when I was married, and when I was married I never cheated. But I made up for it when I wasn’t married. You have to keep your hand in.”

Hefner, who quaintly enjoyed movie nights and other comforts of home, continued to tweet and otherwise interact with the world publicly up until recently, but he had reportedly been in declining health for some time and rarely left the Playboy Mansion.

Which, in the end, was more than a mansion. It was a state of mind.

Hefner is survived by Harris and his four children from previous relationships. In 2011, he wondered aloud to The Hollywood Reporter, “Could I be in a better place and happier than I am today? I don’t think so. In my wildest dreams, I could not have imagined a sweeter life.”