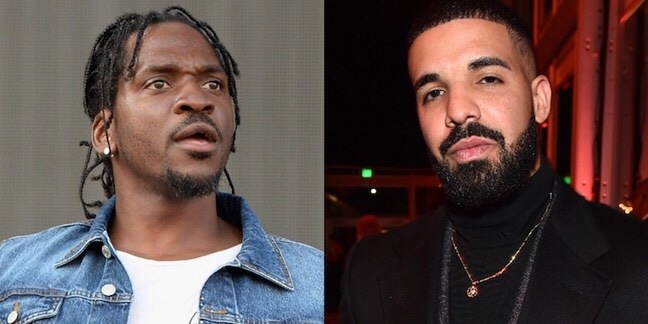 On Friday, Pusha-T reignited his dormant beef with Drake by slipping subliminal shots into “Infared” off his new album Daytona. The same day, Drake released a track called “Duppy Freestyle,” in which he takes aim at Pusha and Kanye West. Now, Pusha has responded with a diss track of his own. On “The Story of Adidon,” he raps over JAY-Z’s “The Story of O.J.” Listen below.

The single’s artwork shows Drake in blackface makeup. As Pusha pointed out on social media, the artwork was pulled from an actual photo shoot with Drake by photographer David Leyes. Two different photos of Drake in the makeup can be found on Leyes’ website. Leyes has since tweeted at Pusha’s manager Steven Victor asking him to take the photo down.

Cleaned her up for IG, but the stench is on her

We talkin’ character, let me keep with the facts

You are hiding a child, let that boy come home

Adonis is your son

And he deserves more than an Adidas press

Love that baby, respect that girl

At one point he references the business practices of Cash Money label head Birdman. (“The M’s count different when Baby divides the pie.”) There’s also a whole portion of the song where Pusha references Drake’s parents.

Dennis Graham stay off the gram, bitch I’m on one

You mention wedding ring like it’s a bad thing

Your father walked away at five, hell of a dad thing

How you a winner but she keep comin’ in last place?

Monkey-suit Dennis, you parade him

A Steve Harvey-suit nigga made him

The song ends with him referencing Drake’s new single “I’m Upset.” “And you talkin’ about you upset? Well I wanna see what it’s like when you get angry, OK? You show me that.”