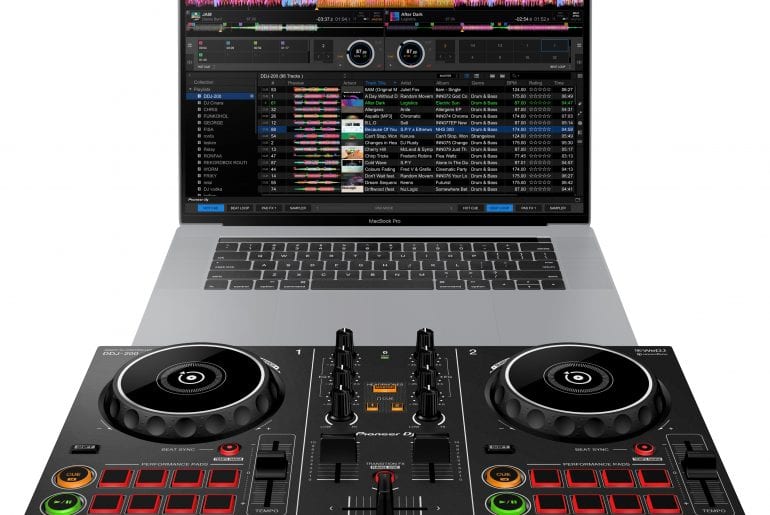 Looking at the Pioneer DDJ-200, it reminds me that as DJs, we live in time when DJ controllers seem to just keep getting more and more complicated.

I had a friend, who is a first officer with a major U.S. airline, tell me that Pioneer DJ’s four-CDJ/DJM-mixer set-up vaguely reminds him of a flight deck – and he’s right. The whole process can get overwhelming sometimes, especially for beginning DJs. I definitely don’t think I could’ve started out dealing well with the level of control and feature sets that many professional controllers now offer.

And that’s part of the magic of Pioneer DJ’s new DDJ-200. It’s delightfully slimmed-down, covering all the essentials and nothing more. It’s also the first entry by a mainstream manufacturer into the wireless DJ gear space – you can wirelessly connect your smartphone to the controller via Bluetooth. And, at just $149, it’s one of the most accessible DJ controllers on the market.

You’ll need a stable internet connection to be able to stream music to your smartphone, but having access to the virtually limitless library of streaming services is an attractive proposition for new DJs who might not have the resources to curate a multi-thousand track library.

The Unit: On the Pioneer DDJ-200, there are two identical deck sections flanking a 2-channel mixer section. Each deck section contains a capacitive jog wheel, eight performance pads, a tempo slider, a beat-sync button, a shift button, and transport controls.

The jog wheels felt good to use. Though they were on the small side, I had enough control for scratching and beat juggling. Below the jog wheels are the performance pads. They are more buttons than pads: they click when pressed and are made of the same material as all the other buttons. Nevertheless, they felt good to use. Depending on the software, they can control hot cues, loops, and effects. Next to the pads are the tempo sliders. Each one has a very sizeable throw for a controller of this size, and there’s a centerline click.

In the center, the mixer section has 3-band equalizer controls above a knob for color effects. When using Pioneer DJ software, the filter can be swapped for other effects, like a bit crusher or a pitch control. The channel faders and crossfader felt good to use. Cutting on the controller was not a problem, and beginners will feel right at home on this mixer.

Between the upfaders, there is a button that activates the Transition FX mode, which is a feature in WeDJ that allows the user to select from 11 crossfader effects that create smooth transitions from one deck to the other. It reminds me a lot of the Filter Fade that Pioneer DJ’s first and second-generation DDJ-SB had. In practice, it was really fun to try single-handedly mixing between two tracks, especially ones of polar-opposite genres. Personally, some of the “cut in” effects felt a little too jarring or abrupt, but many of the “mix” effects felt really subtle and tasteful and offered a nice, smooth transition. Physical VU meters are absent from the device, but they are available virtually in the software. 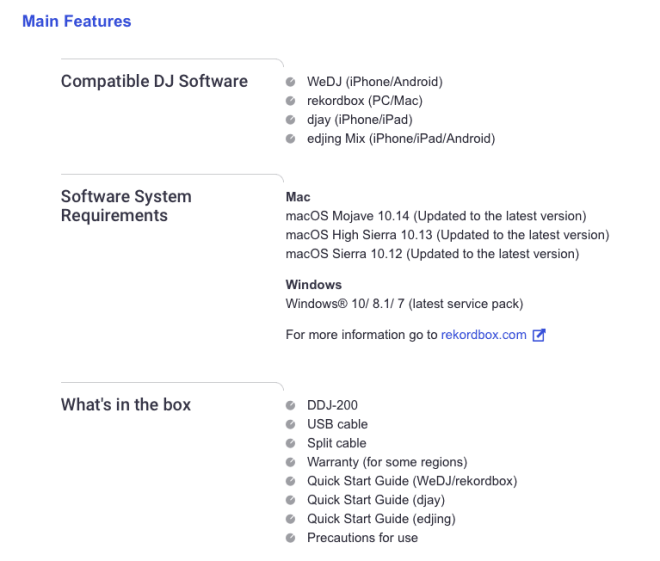 On the Back: The Pioneer DDJ-200 has just a USB Type-B port to connect the device to a laptop or power source with the included cable and a port for a Kensington lock. Keep in mind that there are no audio inputs or outputs on the hardware: all output signal comes through the smartphone or laptop. It is possible to simultaneously monitor with an included stereo-to-mono splitter cable.

Testing: Things got interesting when I connected it to my smartphone. Going into this test, I was skeptical, wondering if Bluetooth as a technology was even able to handle the amount of data needed to be transmitted wirelessly. However, my fears were completely wrong. The device shines as a wireless controller.

Pairing it to my iPhone running WeDJ, incredibly, took just seconds. The wireless range of the controller is similar to that of Bluetooth headphones: you’ll want to be in the general vicinity of the controller for the best functionality. The WeDJ app itself is incredibly easy to use and well laid out. Starting out, there were a series of tutorials that integrated hardware control to explain and demonstrate various techniques; experienced users can skip these.

There’s also a “Pop-Hint” feature, which explains individual controls. WeDJ also has a feature called Phrase Sync, which analyzes tracks and can help DJs determine when to mix in and mix out tracks.

Perhaps I might be impressed with the novelty of a wireless controller, but the hardware-software integration in WeDJ is nothing short of magical.

Among beginner DJ controllers, there is a lot of competition – every brand wants to capture loyalty as early as possible, and if someone started on a Pioneer DJ controller, they might be more likely to invest in a second one further in their DJ career. There are, of course, offerings from the likes of Numark, Hercules, and other manufacturers. Even Pioneer DJ’s own DDJ-400 makes a compelling case for itself, considering it ships with more features and a rekordbox DJ license for under a hundred dollars more.